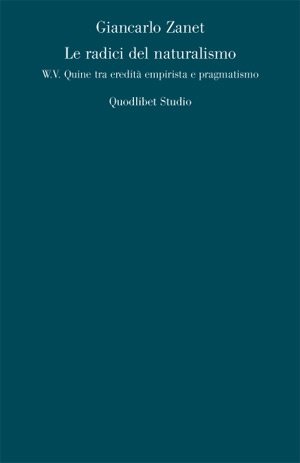 Naturalism, which finds in W.V.Quine one of its more original and largely influential inspirators, asks that philosophy gives up its traditional foundational claims and be more “continuous” with science. All this seems to involve, for philosophy, the cancellation of an autonomous role and of every critical-evaluative and normative possibility with respect to science, with the consequence of opening the way to skepticism.

This book tries to put forward a different interpretation. Characterizing naturalism as an interdisciplinary approach to the problem of knowledge, in which philosophical speculation cooperates with sciences while keeping its autonomy, I claim that one can find in it, in opposition to the most skeptical outcomes of certain contemporary philosophical reflection, a normative dimension encapsulated in the fundamental requirement that our theories must continue to answer to the “court of experience”, alternative to the claims put forward by the theorists of the end of empiricism. Modern empiricism, pragmatism and logical positivism are here individuated as the roots of this version of naturalism: the analysis of the way Quine critically revises this legacy allows us to find in it the fundamental theoretical cores of a fallibilist, holistic and externalist view of knowledge, characterized by its peculiar way of understanding the mind in its function of dynamical structuring of reality.