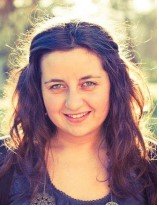 Veronica Santinelli, born in Jesi (An) in 1987, graduated at the University of Ancona with a Master’s degree in Marine Biology in 2013. After graduation, thanks to a six-months-grant of “Campus World” of University of Ancona, she spent a postgraduate training period at Institution of Aquaculture of Hellenic Centre for Marine Research in Crete (Greece), where she was involved in maintenance and management of broodstock (fish) facilities and larvae rearing. After this period, in 2015, she got a position as Research Technician (12 months) for the Hypoxia Project (http://marine-hypoxia.eu/) at Marine Ecology Laboratory of University of Crete in collaboration with Institute of Oceanography of Hellenic Centre for Marine Research (HCMR), Crete (Greece). During this year, she took part in seagrass and sediment sampling activities and processing to find out how hypoxia events could affect these two compounds. In addition, the study was focused on the determination of a relationship between the growth of the seagrass and sediments status and between seagrass regression and hypoxia events. Meanwhile, she had the opportunity to take part of the Scientific Diving team of HCMR and participated to underwater research activities at Experimental Underwater Biotechnological Park: monitoring of environmental parameters and seagrass meadows, sampling of sediment and visual census of macrofauna. In addition, during spring and summer 2016, she was involved as volunteer research assistant in a scientific expedition in Arabian Gulf (Abu Dhabi) and western Indian Ocean (Oman) with PhD student Daniele D’Agostino of Nottingham University (England). The expedition was part of “Coping with extreme environments: reef fishes within the world’s warmest sea” project in collaboration with New York University of Abu Dhabi and the research goal was to investigate the phenotypic and population genetic mechanisms that underlie the persistence of marine species within the Arabian Gulf’s extreme environment.

Since November 2016, she is a PhD student in Earth and Marine Sciences of the University of Palermo and her research is focused on Blue Carbon Ecosystems. Principally, she wants to contribute to the knowledge of the capacity of seagrass meadows and saltmarshes to act as sink of carbon, nitrogen and phosphorous and to evaluate effects of human and natural impacts of nutrients and burial rate.