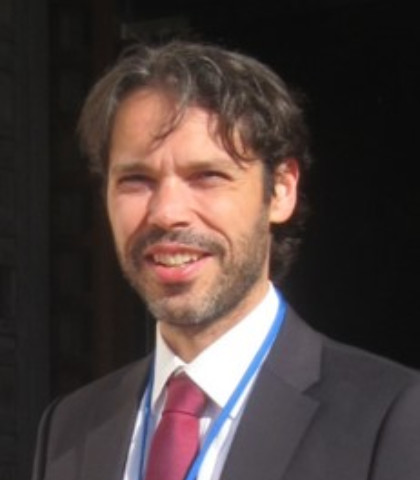 Enter the Student Portal to book the meeting with professors

Giorgio Mannina is Professor of Sanitary and Environmental Engineering at the Department of Civil, Environmental, Aerospace, Materials Engineering (DICAM), University of Palermo. He is in charge of the research line on integrated urban drainage systems and nutrient removal from urban wastewater in the ISA-UNIPA group. He has a degree in Civil engineering from University of Palermo and a Doctorate in Hydraulic engineering from University of Catania. In 2006 he obtained his PhD at the Catania University presenting the thesis: Integrated urban drainage modelling with uncertainty for stormwater pollution management. Since 2016 he is a member of the Scientific council at Palermo University.

From 2006 to 2010, he has been post-doc fellow at Palermo University and he has been involved in research projects dealing with integrated urban drainage systems and advanced wastewater treatments (i.e., membrane bioreactors (MBR), moving bed biofilm reactors (MBBR), a combination of them (MB-MBBR), granular systems etc.). During post-doc period, he has designed and carried out an extensive monitoring campaign on a real integrated urban drainage system nearby Palermo (Nocella catchment) characterized by two sewer systems, two wastewater treatment plants and a river. Since 2007, he is Assistant Professor in sanitary engineerying, environmental mathematical modelling and urban drainage systems. From 2009 to 2011 he has taught at Kore University (Enna) sanitary engineering at the Bachelor of Sciencedegree.

In December 2014 and 2013, he took the Professorship as Full Professor and Associate Professor, respectively. In both Professorships, Giorgio Mannina has been evaluated by an international evaluation Commitee rappresented by five Full Professors working in his research field area (namely, 08/A2 Sanitary and Environmental Engineering), as the candidate with the highest values of the quality research indicators, among the overall applicants, considered by the Committee (i.e., Hindex, # ISI Journals and # normalized citations).

In 2010 he has been awarded of the Torricelli prize as one of the best five Italian researchers. In 2012 he received the Early Career Research Excellence Award by the International Environmental Modelling and Software Society.

Giorgio Mannina's services to the scientific community include serving as a referee for ' over 30 journals'. In 2014 he became a member of the iEMS Board of Directors. He is the author or co-author of over 150 papers which >60 published in international reviewed Journals. His papers have been cited more than 1100 times and his current H-index is 20 (Scopus, January 2016).

Most of Giorgio's research and education activities involves transdisciplinary collaborations with scientists from neighbouring disciplines such as hydrology, environmental chemistry and microbiology, process and control engineering, spatial planning and socio-technical sciences.